The process of minimizing or eliminating the release of pollutants into the environment is known as pollution control. Pollution control is any of a number of techniques used to limit the environmental damage caused by the discharge of dangerous substances and energies. Waste disposal systems, such as sanitary landfills, automotive emission control systems, sewerage system sedimentation tanks, electrostatic precipitation of pollutants from industrial gas, and recycling are all examples of pollution control methods. Pollution occurs when toxins are introduced into the natural environment and cause harm. Pollution can be in the form of any substance (solid, liquid, or gas), or it might be in the form of energy (such as radioactivity, heat, sound, or light). Pollutants are either foreign substances/energies or naturally occurring pollutants that contribute to pollution. Air pollution, light pollution, litter, noise pollution, plastic pollution, soil contamination, radioactive contamination, thermal pollution, visual pollution, and water pollution are all major types of pollution. The control of pollution, second only to the conservation of species from loss of biological diversity, is the conservation concern of largest magnitude; it could even be argued that pollution control is more urgent and crucial than the conservation of species from loss of biological diversity. Pollution control does not imply abandoning current profitable human activities, but rather rearranging them so that their negative consequences do not outweigh their benefits. 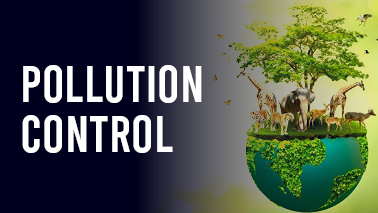