Plants and animals decompose to produce fossil fuels. These fuels, which can be found in the Earth's crust and contain carbon and hydrogen, can be burned to generate energy. Fossil fuels include coal, oil, and natural gas. Coal is a substance found in sedimentary rock deposits, which are made up of layers of rock and dead plant and animal waste. Oil was discovered as a solid material between layers of sedimentary rock, such as shale, at first. Natural gas is typically discovered atop oil deposits in pockets. It can also be found in non-oil-bearing sedimentary rock layers. The anaerobic decomposition of buried dead organisms is the primary source of fossil fuels. Fossil fuels have been powering economies for nearly 150 years, and they now account for around 80% of global energy. When fossil fuels are burned, the carbon and other greenhouse gases that have been stored in the atmosphere are released into the atmosphere. The accumulation of greenhouse gases in the atmosphere has resulted in significant changes in the Earth's climate. 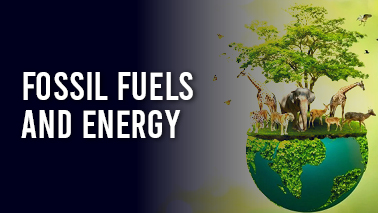